A young hockey player in the NHL has died two days after getting a new motorcycle. He had earned his learner’s permit only six weeks ago. Then he went out and bought a powerful motorcycle.

Motorcycles are tricky to license. Without a sidecar, you can’t really ride with someone else and watch how they do it and you can’t have an instructor watching you. If you follow the rules, you can’t ride on the roads, which means you can’t get much practice before your first driving test. If you stay cautious, a motorcycle licence gives you a chance to stay alive until you really learn how to ride. A low-powered motorcycle is better to start with because it won’t run away with you.

There are some dangers that don’t go away with experience. The commonest motorcycle accident is for a rider with the right of way going straight to be struck by a car driver making a turn. Sadly, car drives look for cars, not vehicles.

His friend and fellow player has changed his mind about getting a motorcycle.

Darwin’s “Evolution Revolution” at the ROM 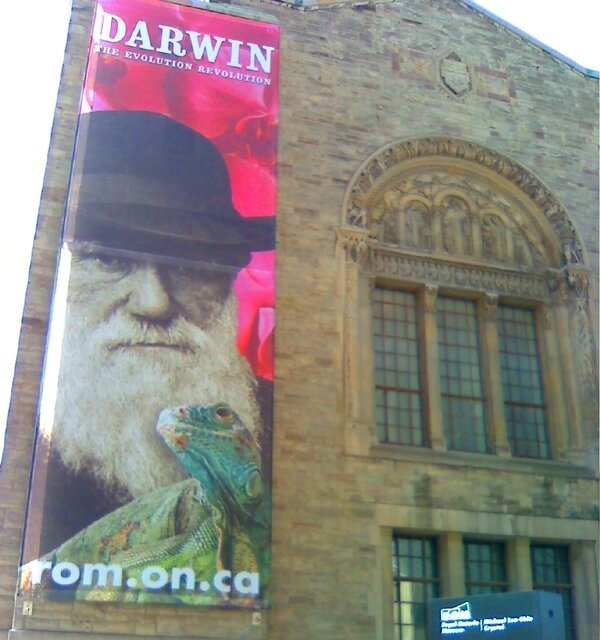 The Royal Ontario Museum is hosting an exhibit about the life and work of Charles Darwin. Toronto Star writer Peter Calamai has a review: “Darwin Still Battling Creationists.” Here are a few points:

Only those with unusual physical stamina will be able to take in the admirable richness of this show in one visit….

In the first place, the explanatory panels crowding the Garfield Weston exhibition hall contain – by official count – almost 39,000 words. At an average rate of two words a second, that’s more than five hours of reading.

And there are far too few places to sit and rest both mind and feet, particularly if your idea of intelligent contemplation doesn’t include being assailed by proselytizing film clips.

… parts of “Darwin: The Evolution Revolution” are an exercise in anti-creationist persuasion….

Plan to go and see Darwin’s notes, a replica of his study, and information about the evidence and insights that helped him to realize the mechanism of evolution.

High-school Jesus at One Horse Shy

One Horse Shy is a web vendor of witty slogans and graphics, which you can buy on T-shirts, mugs, buttons, and decals. I think my favourite is the High School Jesus.

But there are many more. As the vendors say, “We don’t care who you are… We have something for you.” Take a look at their themes: political, Asian, blasphemous, cool, low-brow, high-brow, society, Western.

Here’s what I found:

I seem to be hard on machinery. I drop cameras, carry running laptop computers, and drop cell phones. Small shiny objects are too slippery for me. But most cell phones can stand being dropped a few times. What they can’t tolerate is water. I ruined one by walking in the surf in California. The salt water splashed on my shorts, the shorts got damp, and the cell phone in my pocket discharged its battery and got hot, hot, hot! It may have steamed a little. And that was the end of it. I was carrying it so exposed only so I could hear incoming calls over the ambient noise. Hint: if you have to have your phone handy in a damp environment, put it into a sealed plastic baggie. (Experience is what you get just after you needed it most.)

Now I’ve done it again: spilled water on my new cell phone. Actually, I shoved a bottle of water into my purse. I wanted a refillable bottle so I grabbed a new bike bottle. Being unfamiliar with the bottles, I took a red lid for a bottle decorated in red. The top screwed on but it wasn’t watertight. When I checked a minute later, I found my cell phone at the bottom of my purse, instead of the side pocket when I put it when I’m not so rushed – along with half a cup of water. I fished the phone out and dried it off. I opened it up and dried it off. I took the battery out and dried off the interior.I shook it. Bad sign: little drops of water came flying out. Water trickled out of the hinge. I left the battery out and let the phone dry for hours, but it was too late.

It receives messages but I can’t display them. None of the buttons work except the On/Off.

I’m off to get a new phone again. 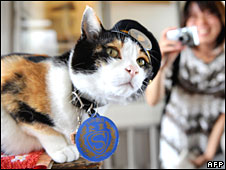 A calico cat at a Japanese railway station is winning passengers for the railway by her pretty face and customer-friendly ways. Tami the station cat is credited with helping to raise custom by 10%.