After the murder of abortion provider George Tiller for doing third-trimester abortions, there were a lot of hysterical accusations about the number of abortions he did and the reasons for them. I looked for solid research on the reasons. I read the personal experiences of people who had to face third-trimester abortions. They wanted to have a baby, but genetic or developmental errors intervened. Given the frequency of these defects, Dr. Tiller probably did about a 100 – 200 a year, but that’s just a rough estimate on my part. It’s certain he didn’t do 60,000, which would keep him working feverishly every day for two lifetimes.

* In 40%, an earlier test indicated that a defect existed but not how serious it was. Doctors delayed and re-tested to see if the defect was serious enough to be life-threatening. Some genetic conditions can be mild or severe, so to prevent unnecessary abortions the doctors waited.
* In 37%, an earlier test failed to find the serious defects that showed up later.
* In 18%, a diagnosis for this kind of defect can’t be made until the third trimester. This often seems to include anencephaly, a fatal birth defect.
* And in the remaining 5%, doctors or parents delayed the decision to abort. I correlated this with what I’ve read about doctors ordering yet another another test to make sure, waiting for a referral, parents not able to believe the news, having hysterics and going home, and praying for a miracle.

If third-trimester abortions are outlawed, some parents may choose earlier abortions when it’s not certain they are needed.

Some critics mentioned club foot as a reason for abortion. Club foot means that at least one foot is turned in. It is not a reason for abortion, but it is a warning to screen very carefully for other health problems. The same goes for other deformities of the digits or limbs. Club foot is associated with spina bifida and anencephaly and other birth defects, some of them fatal.

One defect that can be missed at the second-trimester scan is anencephaly, in which the brain fails to develop. It is uniformly fatal, often before or during birth. 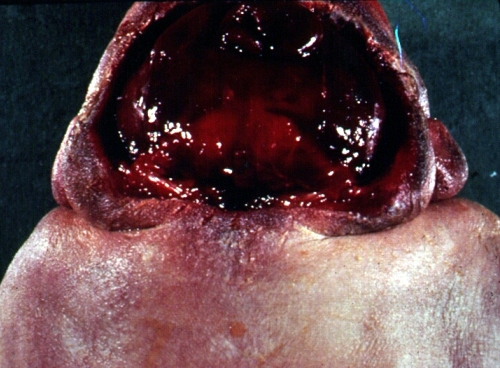 Anencephaly, view of back of head

53 Responses to “What causes third-trimester abortions?”