The author of Jesus and Mo hits the rhetorical nail on the head. You can’t insult an idea.

You can get your science-oriented cards from here: Science Gallery Christmas cards.

All I Want for Christmas

From Kausik Datta at In Sciento Veritas over on SciLogs we have a bit of nerdish humour: The Material Data Safety Sheet for hydrogen hydroxide, or was that dihydrogen monoxide?

And a “Ho, ho, ho!” to you and yours. You can buy these sciency cards at Not on the High Street. 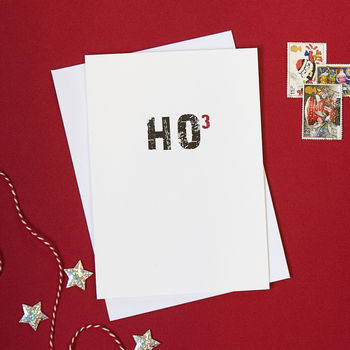 Who controls the economy?

This just in: Many Americans think that God controls their economy for them. And in other news, Thor personally forges every thunderbolt that strikes the U.S., Neptune hand-carves the waves that lap their shores, and Quetzalcoatl cares who wins a football game.

How much is a centi-Dembski?

You may Have seen William Dembsk’s assertion, or repeated it, that he has proved that natural selection working on random chance is not an efficient way of generating mutations or that it’s less efficient than random chance alone. This somewhat nonsensical conclusion was supposedly proved by a computer program written by Dembski and Robert J. Marks. They put up an essay, “The Unacknowledged Costs of Evolution,” criticizing an evolutionary program called ev,  on an unofficial web page.  Unfortunately, obvious errors in basic computing make their results invalid.  The errors were such that the program would never find a solution, such as filling a table with 1’s and then randomly changing some of the cells to 1’s and waiting for some zeroes to appear. With programming skills like those, they would wait forever. And then they used the wrong size of matrix, compounding their error.

Wesley R. Elsberry has the details in an article called  “Unacknowledged Errors in ‘The Unacknowledged Costs’” over on the Panda’s Thumb. It covers who was able to find the errors and why,  what they wrote to the authors, what they did or didn’t do in response, what has happened when other errors were pointed out, and so on. In the badinage of the comments the standard size of a Dembski error was discussed and 65 orders of magnitude was calculated. That’s 1 followed by 65 zeroes.  Someone else pointed out that creationists, in taking the age of the earth to be 6,000 years instead of 14 billion, were only 63 orders of magnitude off target–a centi-Dembski!

One of the first recorded zombie outbreaks was documented at the time of Jesus’ death.

Zombie mini-apocalypses must happen often enough in that part of the world that they’re not even worth recording. Come on! No one else even mentions it! I gotta hand it to whoever wrote the book of Matthew for having the foresight to include this enlightening event in the most infallible book ever written. If it hadn’t been for him, we’d only have one zombie stumbling around on Easter Sunday…..

I don’t know how they’re defending against the zombies. We do know that none of the undead made it to the city until Sunday

This is as well documented as the injunction to condemn gay sex, so you’d think it would get as least as much attention.

51And, behold, the veil of the temple was rent in twain from the top to the bottom; and the earth did quake, and the rocks rent;

52And the graves were opened; and many bodies of the saints which slept arose,

53And came out of the graves after his resurrection, and went into the holy city, and appeared unto many.

54Now when the centurion, and they that were with him, watching Jesus, saw the earthquake, and those things that were done, they feared greatly, saying, Truly this was the Son of God.