Apparently, right-wing pressure has caused the Associated Press to remove a picture from its library. Read Conservative values: opportunism and cowardice. Because we mustn’t offend anyone! The picture is a work of art exploring the edges of sacrilege. Sorry, people, this is the real world. You do not have a right to remain comfortably unchallenged at all times.

So in case you’re wondering what it looks like, the golden image of Immersion (Piss Christ) is here.

The image is from Wikipedia, which has a discussion of the picture and its provocative title.

An orangutan has some human rights in Argentina

. This occurred in Argentina.

What would you eat if you were hungry?

Probably anything you could catch, such as that uncivilized “bushmeat,” such as deer or rabbit or possum.

It’s well known that tectonic plates can slip underneath another plate in subduction zones and that violent earthquakes occur when the plates stick and release. Research is revealing the frequency of potential earthquakes. If it weren’t for ‘lubricated’ sliding, British Columbia would have a major earthquake every fourteen months and Japan every six. I’m not sure whether the lubrication is from melting rock or from seawater or a bit of both. 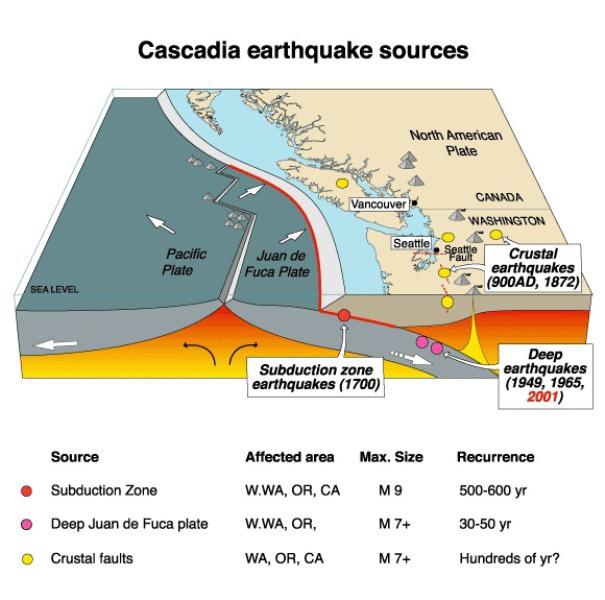 When I checked the weather alerts, I found that our ‘special weather statement’ has been updated to a warning.

A couple of hours of freezing rain likely north of lakes Erie and Ontario this evening. Significant freezing rain over Eastern Ontario overnight. Risk of a flash freeze for rush hour Monday morning.

An intensifying storm centred over Southern Indiana is forecast to cross the Greater Toronto area overnight reaching Petawawa Monday morning. Heavier snow is beginning to develop across parts of Southern Ontario in advance of the low. It will quickly spread across many areas this evening from Southwestern Ontario and to the east of Lake Huron and Georgian Bay.

In the wake of the storm, bitterly cold west to northwest winds will develop on Monday. There is a risk of flash freeze conditions near the path of the low where temperatures have briefly risen above zero then fall sharply early Monday. This may include the Greater Toronto area. These winds will also produce widespread dangerous wind chills beginning Monday night as some of the coldest air in years produces record-shattering cold. Wind chill warnings will likely be issued later tonight.

Travel conditions are expected to deteriorate and become hazardous due to slippery conditions from snow and freezing rain, especially on untreated surfaces.

Environment Canada will continue to monitor this evolving situation and update warnings accordingly.

Please monitor the latest forecasts and warnings from Environment Canada at http://www.weatheroffice.gc.ca.

I went out and bought milk and bread. I can stay home tomorrow, check my e-mail, and communicate by computer. That sounds like a good plan. Stay safe if you have to drive and bundle up if you have to be outside for long.

Winter storm with heavy snow later Sunday and Sunday night, with mixed precipitation for some regions. Windy and sharply colder again Monday with some blowing snow and lake effect snow-squalls.

Old man winter is about to have another go at Southern Ontario as a winter storm developing over Oklahoma threatens the region.

A weak cold front from a separate weather system affecting Northern Ontario will slip into Southern Ontario tonight. This front will give a few centimetres of snow to many areas by Sunday morning, with 5 cm or more falling in locales east of Lake Huron to the south of Georgian Bay. This front will likely stall north of lakes Erie and Ontario on Sunday.

Meanwhile, a low pressure system developing over Oklahoma today will intensify and track northeastward along the line of the stalled front, crossing Southern Ontario Sunday night.

Some disorganized snow is expected on Sunday over some regions. As the deepening low approaches, the snow will become heavy over Southwestern Ontario Sunday afternoon and over the remaining regions Sunday evening. The snow will likely change to some rain near Eastern Lake Erie and Lake Ontario as well as parts of Eastern Ontario later Sunday evening. There is also a threat of some freezing rain in these areas. Any freezing rain that occurs will have virtually no impact on hydro for those areas impacted by the recent ice storm. But more significant freezing rain may impact travel to some degree over Eastern Ontario. Freezing rain warnings will likely be issued later tonight. The precipitation will taper off overnight Sunday or by early Monday in the east.

It appears that regions north of a line from roughly Leamington to London to Barrie to Pembroke will receive snowfall amounts of 15 to 20 cm. Amounts will likely be up to 5 cm south of that line with locally 10 cm in some areas.

In the wake of the storm, bitterly cold west to northwest winds will return on Monday, producing blowing and drifting snow in areas which receive the most snow from the storm. Furthermore, intense snow squalls are forecast to develop off Lake Huron and Georgian Bay Monday and persist into mid week.

Travel conditions are expected to deteriorate and become hazardous due to accumulating snow and poor visibility in heavy snow over Southern Ontario Sunday. If freezing rain falls, untreated surfaces may quickly become icy and slippery.

There is still some uncertainty as to the exact track of the storm centre and where the freezing rain and heaviest snow will fall. Environment Canada will continue to monitor this evolving situation and issue warnings accordingly.

It should be noted that widespread dangerous wind chills are likely especially from Monday night through Wednesday as some of the coldest air in years seems poised to settle across the region accompanied by brisk winds.

Genealogy is getting a boost from DNA analysis, which both sparks interest and helps people to know where to look.

The genes that build America makes some good points, some of them not obvious. One is that black Americans who are descended from slaves depend on white families keeping and allowing them access to records, since their family histories are found in wills and bills of sale.