Social conditions in India mean that, for many people, male infants are valued more than female. Boys stay at home, bring in dowries, work for the family, and take care of parents in their old age. Girls leave home, cost dowries, work for the husband’s family, and take care of the husband’s parents. And families always try to have the children that benefit them.

Working within those rules, families reduce the number of female children by selective abortion, covert infanticide, and starvation or other deadly neglect.

The proportion of females in among children is at an all-time low.

Of course, this leads to problems at marriageable age. Instead of scrapping the dowry and reworking social expectations, parents of boys will be buying kidnapped girls.

It could happen to you. If you lived in Malaysia. There’s a petition. from citizens and friends of Malaysia in the international community:

We, citizens and friends of Malaysia from the international community, call upon Dato’ Seri Abdullah bin Haji Ahmad Badawi, Prime Minister of Malaysia, to act immediately to set free Raja Petra Kamaruddin and Teresa Kok who are presently being held in detention without the right of due process under the Internal Security Act (ISA). We also call for the release of the HINDRAF Five and others presently imprisoned under the ISA.

The two latest detainees – together with Tan Hoon Cheng, a newspaper reporter who was subsequently released following widespread local outrage and protests – were arrested on September 12th under the draconian ISA which permits the police to detain a person for a maximum of 60 days for investigations. Based on the outcome of the investigations, a person can be detained for two years without trial. The two-year term can be renewed indefinitely. The use of such legislation – a legacy of British colonial rule – violates the basic rights of detainees to due process and fair rule of law. [Sounds familiar, doesn’t it?]

We are of the opinion that there is no basis whatsoever to justify the detention of these individuals, despite the manner in which some in the government-controlled mainstream media may have painted them as threats instead of objectively reporting the facts. Raja Petra Kamaruddin is alleged to be a threat to security, peace and public order as a result of posting in his widely followed blogsite – http://www.Malaysia-Today – various articles deemed as seditious and belittling Islam. In his defence, it should be noted that various Islamic political parties and organizations (including the Board of Directors, Muslim Professionals Forum in their Press Release on 13 September) as well as numerous Muslim leaders have publicly refuted the Government’s view that the writings of Raja Petra are in any way a threat to the nation or to Islam; and they have called for his release. Further proof that this allegation is unfounded can also be found in the decision of the Malaysian Cabinet on 12 September ordering the authorities responsible for Internet policing in the country to unblock public access to Raja Petra’s website. The website currently is still unblocked and the so-called seditious and anti-national contents are publicly accessible, although Raja Petra is in detention. Targeting an internet blogger who holds views that differ from the Government is unacceptable in any system of democracy.

Teresa Kok’s arrest under the ISA has been justified by the authorities as stemming from her involvement in activities which can cause tension and conflict among races and religions. This allegation appears to be based on a claim by the former Selangor Menteri Besar, Dr. Khir Toyo, that she organized a petition presented to mosque officials to lower the volume of the azan (call to prayer). Teresa Kok has categorically denied organizing any such petition. Abdul Rahman Nasir, head of the Masjid Kinrara committee (the mosque in question) and Dr Siti Mariah, Member of Parliament for Kota Raja where the mosque is situated, have also denied that Teresa Kok was involved in any such happening. The unjustified arrest of a respected member of parliament and state assemblywoman is unacceptable.

We are encouraged that various leaders of the Barisan Nasional (BN) coalition parties have recently spoken out against the use of the ISA. We wish to express our deep respect for the de facto Law Minister, Zaid Ibrahim, who has resigned in protest against the Government’s use of the ISA on the three individuals. We agree with his view that “there [are] ample punitive laws to act against lawbreakers without having to invoke the ISA. [The law] should only be used on armed terrorists or those out to topple the government by force,”

We urge the Prime Minister to take note that the continued detention of Raja Petra Kamaruddin and Teresa Kok will only strengthen the view of Malaysians and many friends of Malaysia around the world that the Government is rapidly losing control over the political situation and, as a result, is embarking on desperate authoritarian measures. These measures can only further undermine political stability and confidence in the legitimacy of BN rule. They will also undoubtedly contribute to the increasing capital flight and worsen the growing socio-economic turmoil.

The arrests of Teresa Kok and Raja Petra Kamaruddin and their detention under the ISA are not serving Malaysia’s national interests. Both detainees – as well as the HINDRAF Five and other political detainees – should be released immediately and unconditionally.

Over the last fifty years, half of the wetlands along the eastern coast of China have been destroyed for human purposes. It’s a major habitat and migration route for the endangered red-crowned cranes. They can still be seen in Xianghai National Nature Reserve. 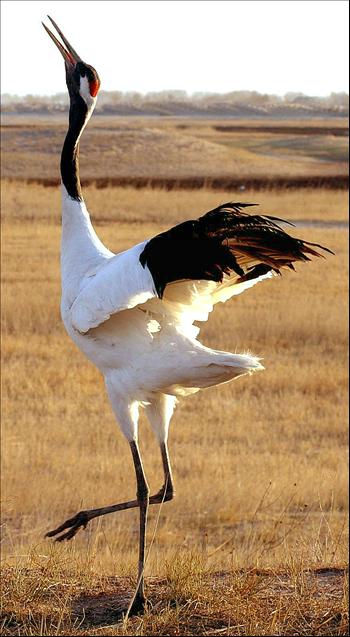 Burma after the cyclone

Two months have passed since a devastating cyclone hit Burma and the government turned away 90% of the people who wanted to help, forbid Buddhist monks from helping and even told its secular citizens not to volunteer. All help must come from the government and the army. Meanwhile, people have lost their supplies of clean water and of food. So what’s going on now? The BBC reports.

*KML or Keyhole Markup Language is an XML-based language for managing three-dimensional geospatial data in the program Google Earth.

It seems that giant sinkholes are not as rare as I thought. Another sinkhole opened in the Russian town of Berezniki on March 3, 2008.

The pictures are very impressive.

The sinkhole destroyed part of a road. Luckily, no one was on the road at the time. This makes me oif it’s practical to include some kind of ground-scanning radar in, say, annual surveys of roads for needed repairs. Any thoughts?

There was also a large sinkhole in Mexico that took three lives, but I haven’t found the date for it yet.

Earthquake is felt across China

A powerful earthquake, magnitude 7.9, near Sichuan has killed at least 10,000 people and numbers are expected to rise. In Beichuan, 80% of the buildings collapsed. It struck in the early afternoon when people were at work and at school. When schools collapsed, hundreds of students were killed. Two chemical plants have also collapsed. There is no news from the epicentre of the quake, which is a relatively remote and mountainous area, about 100 km northwest of Chengdu. Roads are damaged. In contrast to Burma, China has mounted a massive rescue effort. The Red Cross Society of China are bringing in blankets and assessing the situation with the help of a disaster management expert from the international organization. Volunteers and the Chinese army are pressing towards Beichuan on foot. China is relatively lucky in that it practises disaster recovery regularly and also has been preparing for any eventuality during the Olympics. 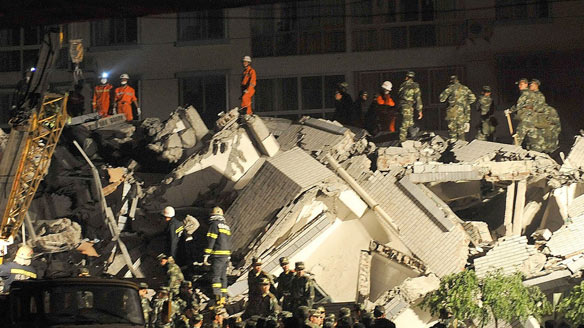 This is the strongest earthquake since 1976. The earthquake was felt in Peking, a thousand kilometers away. Aftershocks have been felt about every 20 minutes and survivors are sleeping outdoors for fear of further building collapses. Harold Asmis of Ontario-geofish estimates that the epicentre might be as much as 30 km deep.

The New York Times has a good link.

Myanmar’s coast and capital city were struck by a major cyclone that may have left 15,000 people dead. According to news reports, whole villages have been destroyed.

Myanmar was formerly Burma. It is ruled by a restrictive military junta, which has been keeping the democratically elected leader under house arrest for years. There’s was some question about whether the government-by-force would let anyone in to help, in case the people would be exposed to foreign contact. However, apparently they have decided to let in relief workers and supplies.