How it all began: “Sexism in the skeptic community.” This is a simple, straightforward story that has been distorted and misrepresented all over the Internet. It has also spawned proper harassment policies at many events and a new movement, Atheism plus.

The science and skepticism conference Eschaton 2012 is underway in Ottawa, Ontario. Esteemed science blogger PZ Myers will be speaking and here he is with the author of Science Notes.

"Ammonite vs. Trilobite" by Glendon Mellow

Canada’s first national CFI conference started Thursday and is continuing until Sunday. Its theme is “The Intersection of Art and Science,” with the major attention-grabbing sessions on Saturday.

The very first session is an exposition on the relatively recent discoveries that connect the evolution of art with the evolution of humanity and language and reducing the suddenness of the “Cro-Magnon Explosion.”

Some of the evolutionary art of Glendon Mellow will be on exhibit, with a few pieces for sale.

Farrell Till on Christianity in America 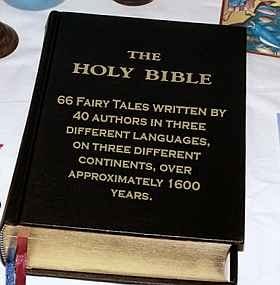 Over the years, I have spent many hours studying the Bible. My first efforts were directed at looking for solutions to the problem of textual inconsistencies and contradictions. I suppose my intention was to discover that there were no grounds for my skepticism, but the more I studied the Bible, the more I realized I would never resolve the problem of biblical discrepancies, because the truth is that the Bible is a collection of books written by uninspired, fallible men, and like all fallible men they made mistakes.  They probably were sincere in their belief that they were writing as representatives of God, but their sincerity didn’t make it so.  The truth was a long time in coming, but finally I realized that God had had exactly nothing to do with the authorship of the Bible.

My first instinct was to keep this discovery to myself, because religion is a sensitive subject.  If I said anything publicly, I might offend somebody, and I didn’t want to do that. At times, I wasn’t able to remain silent because of religious activities in the community that I considered infringements on the rights of others, but for the most part, I kept my views of the Bible to myself.  Gradually, my thinking about this changed, because I eventually realized that people with religious beliefs had no qualms about offending those who didn’t. Christian fundamentalists didn’t mind intruding on the privacy of others by going door to door to try to impose their religious beliefs on others.  They weren’t a bit bashful about polluting the airwaves with their doctrinal nonsense, and they certainly didn’t mind forcing their hackneyed prayers on the unreligious at public meetings that had nothing to do with religion.  Then, finally, during the Reagan administration, I became deeply concerned with the way that the Republican Party openly courted the support of Christian fundamentalists and even at times catered to their whims. I saw a danger in what was happening and decided that the outrageous claims of biblical authority and inerrancy that fundamentalists were making needed to be publicly opposed by an informed opposition.   I decided to be that opposition.

It’s as if humanity had come a full 360 degrees. We’ve moved from the credulousness that thrives on ignorance (excusable when we were actually ignorant), to a healthy skepticism, to just skepticism, to cynicism. And this led increasing numbers of people right back to credulousness again.

The impulse to question (sit in on any undergraduate class if you don’t believe me) is currently perhaps validated above the impulse to learn, or at least to learn first. And into that educational void, far more entertaining and easily communicated conspiracy theories have flooded.

The anti-vaccination movement, whose conspiracy-like claims shift as they’re repeatedly debunked, thrives on a kind of reborn superstition, mainly by connecting vaccination to autism. It’s a perfect example of pseudo-religious irrationality in that it offers conscientious parents a simple way to protect their children against something complex and frightening – autism.

Which would be great, if it were remotely true, because it would mean that bad things don’t happen to good people. Which would be really great.

The trouble is, who’s being scared? 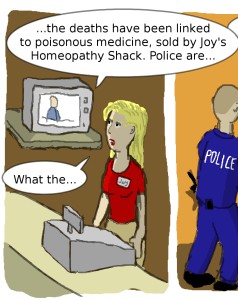 I won’t give away how, but The Amazing Randi showed us how all of us bright people in the audience could be deceived without even noticing that we were interpreting and making decisions about what our senses told us.

Carnival of the Africans 6 at Everyday Skeptics

Check out this carnival about African science, skepticism, and academic life. 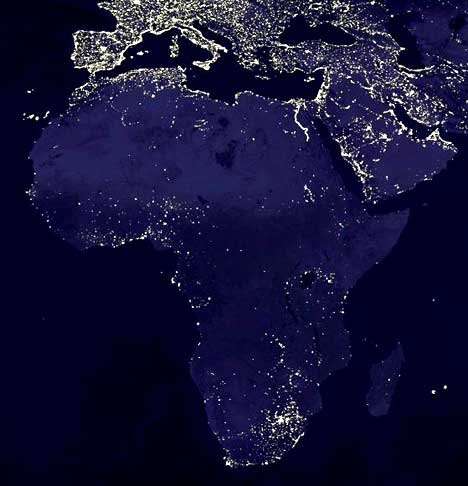