Did you know that some organisms have violet blood? It’s all in the d-orbitals, I understand. Read about blood chemistry and see a larger diagram: iron makes red or green or violet, while copper makes blue, 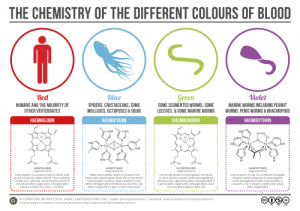 The Winnipeg Free Press reports on six species that have moved out of their home grounds and become a nuisance in Canada or the U.S., doing ecological damage: the Asian carp, the American bullfrog, Burmese python, killer bees, zebra mussels, and purple loosestrife.

Jack Andraka, a high school student in Maryland has invented a new test for cancer of the liver, breast, or pancreas while they are still in early stage. It’s a blood test that takes seconds. It takes 1/168 of the time, is 400 times more sensitives, and it costs 1/26,000 as much. It costs 3¢ and takes five minutes.

The test uses single-walled carbon nanotubes to detect mesothelin, a protein that is overproduced by certain cancers, including mesothelioma and ovarian and pancreatic adenocarcinoma. Jack sent 200 e-mails about his proposed experimental procedure and collected 199 rejections. He found one lab where he test his idea.

Jack credits the Internet for online journals–he was reading in biology class about nanotubes as biosensors–and search engines that let him learn enough to do this.

Anatomy of The Hulk

I recognize those teeth!

Biological artist Glendon Mellow’s work is featured in this lesson on The Hulk’s internal anatomy.

Visit the lesson for a transcription of the informative captions.

I’m enjoying my high-definition BBC feed while I still have it. Recently, I enjoyed a documentary about Madagascar narrated by Sir David Attenborough. He mentioned a rare carnivore called Grandidier’s vontsira (BBC, Island of Marvels, Part 3. YouTube clip, 0:12:08–0:13:24). I had never heard of it, and no wonder. It’s a rare mongoose found only in a tiny part of Madagascar. It’s like the mammalian equivalent of a snail darter, a tiny fish found only in certain rivers.

It took a little while for me to find out more. It’s more commonly called Grandidier’s mongoose. It was named only in 1986 and little is known of its life. It’s adapted to an arid climate, eats small prey and insects, and pairs off to have one offspring. If you watch the video clip, you’ll hear its voice, distant whistles and then a cross between a mew and a coo.

Most of the prey items caught are insects but the greater biomass, 57% – 80% depending on the season, comes from small animals. 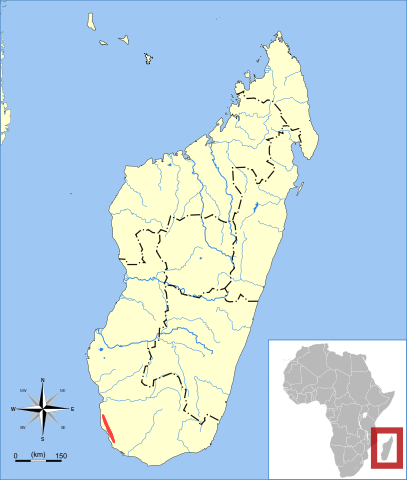 The range map for Galidictis grandidieri is from Wikipedia, and ultimately from the IUCN Red List of Threatened Species, species assessors and the authors of the spatial data.

This is the kind of basic information that everyone should know.

Some of the words on this link go to sub-trees, but most of them go to pictures of example animals.

Note that the closest living relative of whales are hippos! Since the discovery of transitional fossils linking whales to the hoofed animals, orders Artiodactyla and Cetacea have been combined into Cetartiodactyla.

Trees like these were originally devised to trace similar characteristics between species and to systematically group them into more or less similar. Only later was it realized that these trees also represent bonds of common ancestry.

The grandson of Jacques Cousteau, Philippe Cousteau, is on Discovery World HD looking for manta rays in the Indian Ocean. That ocean covers 13% of the world’s surface and has 5,000 species, many of them unique to it.

The marine biologists locate manta rays by finding a cleaning station, where cleaner wrasse and butterfly fish hang about waiting for fish to come to them to have parasites and food particles cleaned away.

About 22% of the coral reefs in the Indian Ocean are under threat. Crown of thorns starfish, which eat coral animals, have multiplied a hundredfold as their predators are fished out.

There is one population of wild dugong left in the Indian Ocean. They are shy herbivorous mammals that have been both hunted and accidentally tangled in nets.

Mitosis is when cells split into two, each with the full complement of chromosomes.

Meiosis is when cells split into two, each with half the chromosomes, for the production of sperm and egg.