Hover cat: the dark side

This beast is from LOLcats.com and the photo was uploaded by Cassandra.

What a difference a little sunshine makes

This is one of the mountains overlooking Revelstoke, B.C. I think it’s Mount Cartier. 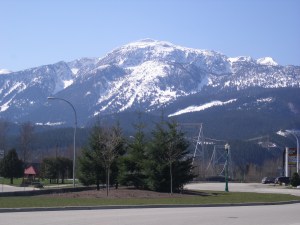 Compare to the same mountain on a cloudy day.

The Sensuous Curmudgeon reports that the movie Expelled has been dropped by hundreds of theatres by its third weekend.

By contrast, an unremarkable sci-fi flick called Jumper, released a few months ago grossed $24,000,000 in its first week.

Why are all these kittens looking up?

Greg Laden points out a “Poll Expelled! by Ben Stein” : blog owners yank it rather than displaying results they don’t want. The poll has disappeared from the Expelled-the-movie blog. But it’s still on the Interwebs:

It’s interesting to me that the number of people voting for Intelligent Design in our schools is about 10% of the number asking, “What is it?”

In case the graphic isn’t clear, the question is, “Do you think that the theory of Intelligent Design should be taught in our education system?” The answers are:

Oh, to be a fly on the wall for these discussions. It seems that Dennis Day of Cobden, Ontario, who has two small children, acquired a lion cub as well. When it was six months old, he got word that the Children’s Aid was concerned about the safety of his children and was thinking of taking them away. So he gave the lion cub to a friend on an Indian reserve  near Maniwaki, Quebec, for safe-keeping. Then he could tell Children’s Aid that the lion was gone. But the person he gave it to didn’t keep the animal secure and it wandered off. It was seen crouching in a ditch by the highway. Police put a rope around its neck and encouraged it to climb into the back seat of a police cruiser. The young lion spent the night in a jail cell. It will be sent to Granby Zoo.

What were people thinking? The ones who got the cub in the first place (and no one knows whence) thought it would be just fine to raise a lion in the house. The people on the reserve seem to have thought they could just let the cat out? And the police: “Here, kitty, kitty?”