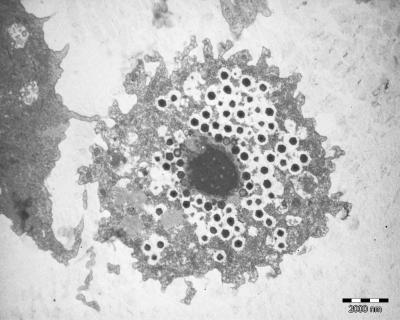 A study of the proteins of giant viruses adds them to the list of primitive life forms that have existed since the dawn of life.  They seem to constitute a fourth superkingdom. Professor Gustavo Caetano-Anollés led the analysis.

Scientists found ancient structural patterns in the folds of the virus proteins, which are virtually molecular fossils. Folds that are common to all organisms studied are the oldest. Less common folds are, literally, new wrinkles.

The researchers looked at archaea, bacteria, eukaryotes, and both kinds of viruses. The giant viruses have  biochemistry for making proteins, which small viruses have lost.

Modern viruses have lost much of their biochemical machinery and become obligate parasites of an extreme kind.

“Giant Viruses Coexisted With the Cellular Ancestors and Represent a Distinct Supergroup Along With Superkingdoms Archaea, Bacteria and Eukarya“

Todd Oakley at the University of California is unravelling the mysteries of convergent and parallel evolution in a variety of organisms, aided by post-doctoral students on several projects.

“My research involves comparisons of independent evolutionary transitions such as convergence, parallelism, duplication, and homoplasy. Such transitions provide an element of replicability within the singular history of life, and can yield insight into the most general evolutionary questions. For example, when and why do the same molecular or developmental changes underlie similar – though independent – evolutionary changes? What are the fates of duplicated genes, and what causes them to diversify or retain old functions? How can we even determine what is an independent evolutionary event?”

One of his students has discovered that chitons have eye lenses made of aragonite, which is the material used by trilobites.

Taxon of the week: Aeromonas

I’ve found a new website: Catalogue of Organisms. Their post, “Taxon of the week: Aeromonas” describes a genus of aquatic bacteria that are responsible for some ugly infections in fish, humans, and other animals: The Genus Aeromonas: Taxonomy, Pathogenicity, and Infection by J. Michael Janda and Sharon L. Abbott.

The bacterial colonies to the left are illuminated by transmitted light.

The Galapagos Islands are a group famous for having different species on each island due to evolutionary processes, including several species of Galapagos tortoise. Four of the fifteen (or ten or eleven) known species (or subspecies) have gone extinct.

The  species native to the island of Floreana was believed to be extinct for 160 years, since the early 1840s. Now, scientists have found evidence that a remnant population may have survived in an isolated part of the larger island of Isabela. The tortoise native to Floreana was Chelonoidis elophantopus,* recognized by the saddleback shape of its shell. The tortoise of Isabela is Chelonoidis becki, with a dome-shaped shell.

Three years ago, a team from Yale University found tortoises around the Wolf Volcano on Isabela that appeared to be hybrids, giving them the hope that they could breed back to a tortoise that looked like the extinct species (Extinct tortoise ‘could live again’). However, further exploration has turned up more than eighty that seem to have a C. elophantopus as one of their parents—and some of them are only fifteen years old. That suggests that a few purebred elophantopus tortoises survive. The scientists’ calculations suggest that there are about 38 of them, including both males and females. See “‘Extinct’ Galapagos tortoise may still exist.”

The tortoises may have been moved by whaling ships that picked up the tortoises on Floreana, then stopped at the north end of Isabela and lost a few tortoises in their stopover. It’s hard to see the tortoises in the brush growing over the rugged and arid country. The group took samples of 1,600 tortoises to find their 84 hybrids–half of one percent of the population. They will now discuss with the government whether to keep on surveying and whether they can set up a breeding program to recreate the tortoise of Floreana.

What’s the difference between a turtle and a tortoise? Ha! What I grew up calling a “turtle” is more properly called a “terrapin.” And Galapagos is spelled “Galápagos.”

Evolution of complexity in molecular “machines” 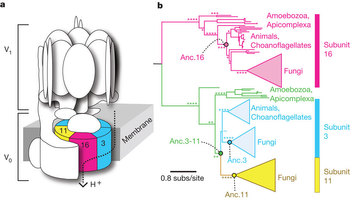 A proton pump is a ring of proteins embedded in a cell wall, which moves molecules, atoms, or ions through the wall in a preferred direction. Research into the V-ATPase proton pump in eukaryotes has a ring of  six linked protein molecules in the membrane wall and a ring of eight inside the cell. As its name implies, it moves hydrogen ions (protons), through the cell wall. Research into its history shows that greater complexity can evolve without a change in function. The “V” indicates a plant vacuolar pump. They are found not in the external cell wall but in the walls of vacuoles, or liquid-filled spaces, within the cell.

…the complexity of an essential molecular machine—the hexameric transmembrane ring of the eukaryotic V-ATPase proton pump—increased hundreds of millions of years ago. We show that the ring of Fungi, which is composed of three paralogous proteins, evolved from a more ancient two-paralogue complex because of a gene duplication that was followed by loss in each daughter copy of specific interfaces by which it interacts with other ring proteins. These losses were complementary, so both copies became obligate components with restricted spatial roles in the complex. Reintroducing a single historical mutation from each paralogue lineage into the resurrected ancestral proteins is sufficient to recapitulate their asymmetric degeneration and trigger the requirement for the more elaborate three-component ring. Our experiments show that increased complexity in an essential molecular machine evolved because of simple, high-probability evolutionary processes, without the apparent evolution of novel functions. They point to a plausible mechanism for the evolution of complexity in other multi-paralogue protein complexes.

I won’t be able to give a detailed explanation until the description comes out from behind a paywall. There’s an explanation at Nature blog and one at  Kurzweil.

Look here for a diagram of V-ATPase. This diagram shows the ancestral molecule, in green, and its more specialized descendents, which need their increased complexity to properly assemble and function. The ancestor is on the left.

Does obesity, or even high-fat food, change the brain?

Experiments with mice suggest that fatty foods can cause inflammation in the hypothalamus of the brain. It’s an area that helps to regulate hunger and thus body weight; Isaac Asimov called it the “appestat” and suggested that fat people were hungrier people. 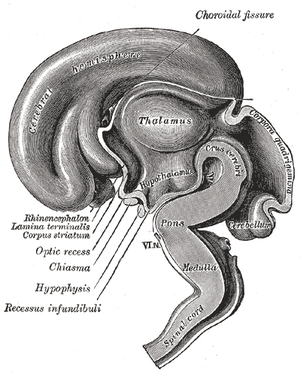 Here’s the article: “Could obesity change the brain?” Inflammation is seen after one high-fat meal. It does down after a week or so, but then a month later it comes back and persists for many months—a long time in the two-year life span of a mouse. Does it change the mice’s appetites? I’m not sure. Michael Schwartz, a professor and director of the Diabetes and Obesity Center of Excellence at the University of Washington, says “This might reflect fundamental biological changes in how the brain works that help explain why it’s so hard to keep weight off.” The research was published in the Journal of Clinical Investigation (J Clin Invest. 2012;122(1):153–162. doi:10.1172/JCI59660).

It’s also possible that obesity, a longer-term exposure to fat in the bloodstream, causes persistent inflammation, as found in earlier studies of obese lab animals. Exactly what does this mean? The researchers are now looking at NMRI scans of obese humans and finding have inflammation of the hypothalamus.

Inflammation in the human hypothalamus: A, normal weight; B, obese.

It’s suggestive that some of the best diets reduce the amount of fat eaten and gradually reduce the craving for fats.

Long-distance swimmers, cyclists, and runners need special nutrition to keep from running out of fuel or becoming dehydrated. The traditional “carbo-loading” involves a big supper of pasta the night before, to enable the body to build quick-energy glycogen stores. During the race, athletes ingest low-fibre, high-carbohydrate foods and slightly salted and sugared water such as Gatorade. This research suggests how athletes can meet their needs without loading up the night before: “Nutrition for endurance sports” by A. E. Jeukendrup.

Endurance sports are increasing in popularity and athletes at all levels are looking for ways to optimize their performance by training and nutrition. For endurance exercise lasting 30 min or more, the most likely contributors to fatigue are dehydration and carbohydrate depletion, whereas gastrointestinal problems, hyperthermia, and hyponatraemia can reduce endurance exercise performance and are potentially health threatening, especially in longer events (>4 h). Although high muscle glycogen concentrations at the start may be beneficial for endurance exercise, this does not necessarily have to be achieved by the traditional supercompensation protocol. An individualized nutritional strategy can be developed that aims to deliver carbohydrate to the working muscle at a rate that is dependent on the absolute exercise intensity as well as the duration of the event. Endurance athletes should attempt to minimize dehydration and limit body mass losses through sweating to 2-3% of body mass. Gastrointestinal problems occur frequently, especially in long-distance races. Problems seem to be highly individual and perhaps genetically determined but may also be related to the intake of highly concentrated carbohydrate solutions, hyperosmotic drinks, as well as the intake of fibre, fat, and protein. Hyponatraemia has occasionally been reported, especially among slower competitors with very high intakes of water or other low sodium drinks. Here I provide a comprehensive overview of recent research findings and suggest several new guidelines for the endurance athlete on the basis of this. These guidelines are more detailed and allow a more individualized approach.

A massive analysis of 23,000 sets of genes representing most genera of plants has produced what the New York Times calls a makeover for the tree of life. They used the genomes from 150 plants but used supercomputers to identify groups of genes to compare. The seed-bearing plants go back 300 million years, to cycads and conifers, which are gymnosperms–plants with naked seeds unprotected by tough coatings. Those with protected seeds are called angiosperms.

The computer flagged certain proteins as having special significance for the functioning of plants, which could be the keys to important evolutionary relationships. Of the hundreds identified, the scientists randomly selected a few for testing, which confirmed their hunch that those proteins were responsible for plants’ following different evolutionary roads. Some of these relationships date back 300 million years, when the first gymnosperms, the group that includes pines and ginkgos, appeared.

Among other things, they’ve solved the position of gnetophytes.

The scientists organized the results into a phylogenomic tree according to their evolutionary interrelatedness, which included some surprising insights. For example, gnetophytes, a group that consists of shrubs and woody vines, are the most primitive nonflowering seed plants, according to the researchers’ analysis. Those plants date back to the Mesozoic “age of the dinosaurs” and form the base of the evolutionary tree of seed plants.

Here is one of the phylogenetic trees that resulted from this massive re-analysis: