Eucritta melanolimnetes represents ancestral tetrapods. We mammals did not descend from amphibian: we descended from reptiles. The Amphibians are on a separate branch of the family. Eucritta has features of both. It is a transitional form, vulgarly called a “missing link.” But obviously it’s not missing. Described by Jennifer Clack in 1998, it’s from the early Carboniferous Era.

A. sediba is a splendid transitional fossil 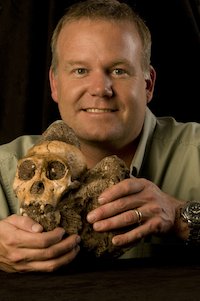 Lee Berger with A. sediba

Look at the quiet, yet awed, delight on this palaeontologist’s face. That is the reward of science. He has been analyzing two almost complete skeletons of Australopithecus sediba found together in South Africa.

Another gap in human evolution has been decisively filled. Australopithecus africanus, discovered by Raymond Dart in the 1930s, was a climbing, ape-like hominid. Homo habilis and Homo erectus were human-like and apparently tool–using. A. sediba seems to be right between them. It has longer legs than A. africanus and walks bipedally. It has features found in both A. africanus and H. habilis. Its hand is more like our own than is that of H. habilis. Carl Zimmer explains: The verge of human. Between this fossil and Ardipithecus ramidus, we seem to be getting a grasp on ape evolution.

A magnificent new fossil of an early primate has been found. The fossil includes a carbon film that shows hair surrounding the animal. The only way to preserve these is to slide them onto a flat slab and, basically, varnish it. It has been named Darwinius masillae.

It got a lot of publicity. It’s not every fossil that gets introduced with its own magazine article, TV special show, and nickname (“Ida”). It also cost a lot of money. The authors noted

The specimen has an unusual history: it was privately collected and sold in two parts, with only the lesser part previously known. The second part, which has just come to light, shows the skeleton to be the most complete primate known in the fossil record.

However, it’s not the missing link in human evolution. As PZ Myers points out, it’s far too early. He has a good discussion about what’s important about it–and what it’s not:

When [Brian Switek at] Laelaps says, “I have the feeling that this fossil, while spectacular, is being oversold,” I think he’s being spectacularly understated. [At Evolving Thoughts, John] Wilkins also knocks down the whole “missing link” label…. Laelaps has some serious reservations about the analysis — the authors may not have done as solid a cladistic analysis as they should, and its position in the family tree may not be as clear as it has been made out to be.

Ambulocetus, a pre-whale, discovered in 1992; image by Shawn Gould

National Geographic Magazine has published images and brief descriptions of seven transitional fossils discovered since Charles Darwin published his theory of evolution. Each of them is another  big piece of evidence confirming the explanation of how life’s diversity came developed.

Transitional forms: Tiktaalik and others

Here’s a brief review of several lovely transitional fossils in the tetrapod line, which tie together lobe-finned fishes with early land amphibians. The latest discovery is, from 300 million years ago, Tiktaalik roseae: “Hello, Beautiful.” 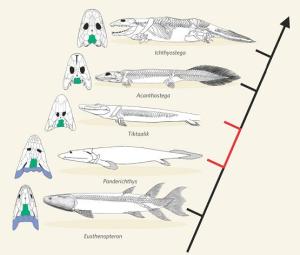 Tiktaalik is an example of the predictive power of evolutionary theory. The discoverers noted the kind of fossil that they were missing, its expected environment, and the approximate age that it should be, then looked in rocks of the right age and geological origin in northern Canada. And voila! There was their fossil.

The CBC has an article about “Origins of nervous system found in sponges.”

Researchers at the University of California, Santa Barbara, have discovered that while sponges remain the only multicellular animals without a nervous system, they do possess most of the genetic components of synapses, one of the essential building blocks of a nervous system.

The results are being published in PLoS ONE, a journal of the Public Library of Science.

Scientists compared the genes of a species of sponge to human genes for expressing a synapse (a connecting point between nerve cells). This suggests that the sponges developed many of the building blocks for constructing a true nervous system.

We look at the evolutionary period between sponges and cnidarians as the period when the nervous system came into existence, about 600 million years ago. It is clear that evolution was able to take this entire structure [in sponges], and, with small modifications, direct its use toward a new function.

NOTE: Fossil sponges go back to the Vendian era, about 680 million years ago. About 300 genera of fossil sponges are known. (I don’t know how many species.) See geological time line.

Going further back, the paramecium, a relatively large single-celled animal, uses the same ions as all other animals to generate coordinating signals to its thousands of cilia.

Addendum: P.Z. Myers had posted a detailed description of the discovery in terms of proteins and gene expression. He also has a nice diagram of a synapse.

I was reading about one-celled animals the other day in the Big Book o’ Invertebrates. Ciliated animacules, or ciliates, have thousand of tiny cilia that beat in waves and propel them through water. Some ciliates are as large as 4 mm long, much larger than some multi-celled animals. For them to move, the motion of the cilia must be co-ordinated. Ciliates use a wave of electronic potential to do so. I was fascinated to learn that they use the same chemical system, namely potassium and chlorine ions as we do, to send nervous impulses throughout their protoplasm and stimulate motion. The difference is that their ions are not found in nerves and around nerve cells.

Some of them, such as the famous genus Paramecium, have pigmented eyespots that detect light, so that they can move towards light or shadow.

So we have at least two example of reducible complexity (nervous impulses without nerves, light detection without eyes) when we compare ourselves with paramecia. To me, common biochemical pathways imply probable descent from a common ancestor.

The illustration is from Living Invertebrates, so is presumably by M. K. Waldrip.