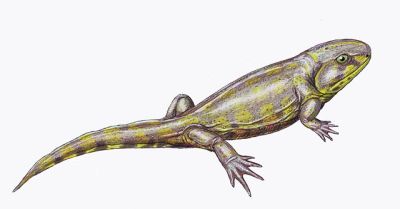 Eucritta melanolimnetes represents ancestral tetrapods. We mammals did not descend from amphibian: we descended from reptiles. The Amphibians are on a separate branch of the family. Eucritta has features of both. It is a transitional form, vulgarly called a “missing link.” But obviously it’s not missing. Described by Jennifer Clack in 1998, it’s from the early Carboniferous Era.