GPS and all that

A GPS device can be very useful, especially in the dark, in exurbia, when you’re trying to find an address. On the other hand, following instructions can lead to loss of navigational awareness. Some accidents have been caused by people following GPS instructions when they shouldn’t–onto railroad tracks for example.

They’re so cute when they play “Science Museum” part 2

Eamon Knight recorded his impressions of the “Creation Science” “museum” near Cincinnati last fall. I think it’s a shame that such a fine city, named after a Roman hero, should be associated in any way with a monument to superstition. Here’s “A visit to the creation museum, part 2.”

First, establish your conclusions. Then cram the facts in any which way.

Eamon’s own country of Canada has its own “creation museum.” However, it’s housed in an individual’s house and represents the illogic of only one person.

Ring species and a recommended book

I thought that ring species could include more than two species, but the canonical ring species is an unusual geographic distribution that demonstrates a snapshot speciation. A ring species occurs when two populations of a species separate to go around a barrier, are lucky enough to find habitat all the way around the obstacle, and move slowly enough that by the time they meet on the other side they are no longer interested in mating. You end up with what we would call two species if they were isolated, but they are joined by a string of populations with transitional features and a gradient of characteristics and genetics between the two. Except at the isolated ends, it’s impossible to draw a line between the two.

This one gets a good word from Action Bioscience:

To learn more about speciation, a fascinating, very understandable, and very enjoyable read is Frogs, Flies, and Dandelions. Speciation — The Evolution of New Species by Menno Schilthuizen. This book gives an excellent introduction to the major theories regarding speciation and summarizes many recent findings

I am so stealing this from SkepChick!

You can't spell 'evolve' without 'love'!

Michael Paulson of the Boston Globe has been promoted, I guess, to city editor. He won’t be covering religion and won’t have time to keep up his blog, Articles of Faith. Mr. Paulson helped to keep alive the story of sexual abuse by priests in the Boston Roman Catholic archdiocese and its cover-up by church administrators. Read “A Farewell to Beat and Blog.”

Some of the snowflake photomicrographs taken by the man who invented the technique are up for auction at a price of around $5000 U.S. each. “Snowflake” Bentley received a microscope when he was fifteen years old and by the time he was nineteen, in 1885, he had invented a way to photograph snowflakes through the microscope, outside in the cold so they wouldn’t melt. 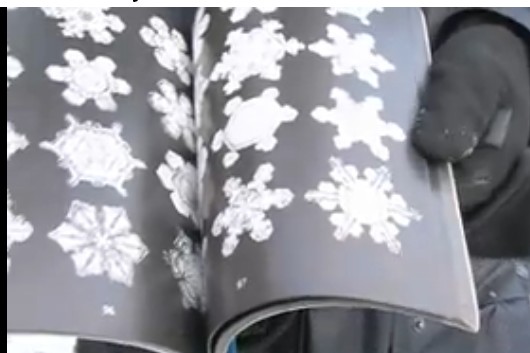 He spent much of his life photographing thousands of snowflakes. To show other people their beauty, in 1931 he published a book called Snow Crystals. It was re-issued in the 1970s (above) and at one time I had a copy of it.

He told a magazine in 1925: “Under the microscope, I found that snowflakes were miracles of beauty; and it seemed a shame that this beauty should not be seen and appreciated by others. Every crystal was a masterpiece of design and no one design was ever repeated. When a snowflake melted, that design was forever lost. Just that much beauty was gone, without leaving any record behind,” he said.

In Jericho, Vermont, where he lived, there’s now a museum with about 2000 of his prints.

Thomas Frank is the author of two important books about U.S. politics.

The Wrecking Crew describes the havoc that conservative and religious-right Republicans wreaked in the U.S. federal government.

Frank’s book, “What’s the Matter with Kansas? describes how Kansas went from a radical state that valued individuality and nonconformity to a hard-boiled, conservative state. It has been made into a movie. which Roger Ebert called one of the top ten documentaries in 2009. It will be opening around March.

And then there’s One Market Under God, about the weird economic rhetoric of the 1990s, and The Conquest of Cool, about economic co-option.