Hesperornis, or “western bird,” was discovered by O.C. Marsh in 1872. At one location he found dozens of well-preserved specimens from what had formerly been a shallow sea in the middle of North America. He name the species Hesperornis regalis. The birds are four to five feet tall, or long you might say, as they likely never got farther from the water than seals. Their hind legs were turned backwards to act as strong paddles, so they couldn’t really stand up. And they certainly couldn’t fly–their wings are entirely gone!

Hesperornis fossils date back to about 70 million years ago. The North American fossils are found all up and down the central continental sea. Several species are known. Marsh found another species of Hesperornis, but he was so reluctant to consider that it might be found in a different range that he gave it another name, and it took later paleontologists to sort out the new fossil, which they called Hesperornis montana.

When I first saw it, at the Page Museum at La Brea, I thought “wingless penguin.” Other people call it a large, wingless loon, and that might be more accurate. It was an early example of “use it or lose it” in evolution. 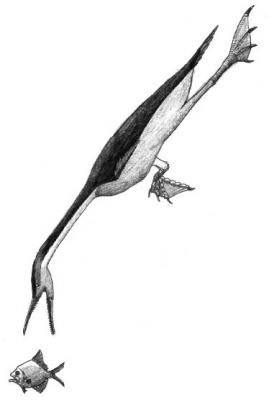 When Birds Had Teeth

By FREDERIC A. LUCAS, Evolution: A Journal of Nature, August, 1929. –from Internet archive

SEPARATED by millions of years from that earliest of all known birds, the toothed Archaeopteryx of the Jurassic period (described last month), the next birds that we know come from the chalk beds of western Kansas. Time enough had passed for members of one group to have quite lost their wings, yet they still retained teeth, the most bird-like of them being quite unlike any modern bird in this respect. The first specimens were obtained by Professor Marsh in his expeditions of 1870 and 1871, but not until a few years later, after the material had been cleaned and was being studied, was it ascertained that these birds were armed with teeth. The smaller of these birds was not unlike a small gull…. The larger, however, was remarkable: The Toothed Diver, Hesperornis Regalis [sic].

In many ways, Hesperornis was a great diver, in some ways the greatest of the divers, slender and graceful in general build, looking somewhat like an overgrown, absolutely wingless loon.

The penguins, as everyone knows, swim with their front limbs — we can’t call them wings — which, though containing all the hones of a wing, have become transformed into powerful paddles. Hesperornis, on the other hand, swam altogether with its legs — swam so well with them, indeed, that through natural selection the disused wings dwindled away and vanished, save one bone. Hesperornis was large, upwards of five feet long, and if its ancestors were equally bulky, their wings were quite too big for swimming under water as do the short-winged Auks which fly under water quite as they fly over it. Hence the big wings were closely folded upon the body to offer the least possible resistance, and it was advantageous that they and their muscles dwindled, while the bones and muscles of the legs increased by constant use. By the time the wings were small enough to be used in so dense a medium as water, the muscles had become too feeble to move them, and so degeneration proceeded until but one bone remained, a mere vestige. The penguins retain their great breast muscles, as did the Great Auk, since it takes even more strength to move a small wing in water than a large wing in the thinner air. [Without evo-devo and mathematical analysis to confirm it, this is guesswork.]

As a swimming bird, one that swims with its legs and not with its wings, Hesperornis has probably never been equalled, for the size and appearance of the bones indicate great power, while the bones of the foot were so joined to those of the leg as to turn edgewise as the foot was brought forward, thus offering less resistance to the water. It is remarkable that these leg bones are hollow, because as a rule the bones of aquatic animals are more or less solid [inherited from large, land-dwelling dinosaurs], their weight being supported by the water; but those of the great diver were almost as light as if it had dwelt on dry land. That it did not dwell there is conclusively shown by its feet.

The most extraordinary thing about Hesperornis is the position of the legs relative to the body, and this is something that was not even suspected until the skeleton was mounted in a swimming attitude. As anyone knows who has watched a duck swim, the usual place for the feet and legs is beneath and in line with the body. But in our great extinct diver, the joints of the leg bones are such that this was impossible, and the feet and lower legs must have stood out nearly at right angles to the body, like a pair of oars. This is such a peculiar attitude for a bird’s legs that, although apparently indicated by the shape of the bones, it was at first thought to be due to the crushing and consequent distortion to which the bones had been subjected, and an endeavor was made to place them in the ordinary position, even at the expense of a dislocation of the joints. But when the mounting of the skeleton had advanced further, it became evident that Hesperornis was no ordinary bird and could not swim in the usual manner, since this would have brought his knee-caps uncomfortably up into his body. And so, at the cost of much time and trouble, the mountings were so changed that the legs stood out at the sides of the body, as shown in the picture, a position verified later by the discovery of the specimen now in the American Museum of Natural History, in which the limbs lay in just the position given them by the artist, Mr. Gleeson. [See image below.] 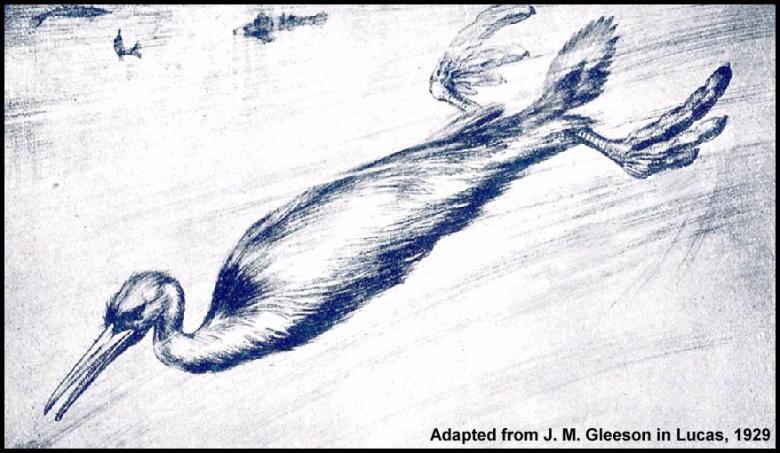 Hesperornis, by Lucas after Gleeson