The Talk Origins post of the month for February is by Lenny Flank: “Is present human diversity possible if only eight people survived Noah’s Flood?”

The first stumbling block is how much genetic variation got off the boat. Lenny points out that with eight people and two genes each for each gene location, the whole family, even if none of them shared a single gene, could carry only 16 alleles (variations) for each gene. Larry writes:

today we find human genetic loci (such as hemoglobin or the HLA complex) that have well over *400* different alleles (indeed some have over *700* different alleles). Hmmmm. Since there could have only been 16 possible on the Big Boat, and since there are over 400 now, and since 400 is more than 16, that means that somehow the GENETIC INFORMATION INCREASED from the time they got off the Big Boat until now.

And he goes on from there. 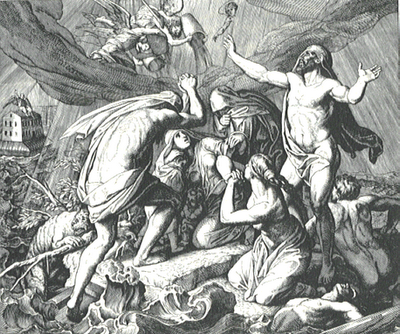 God drowns children because their parents displease Him

Then at last, Noah sailed; and none too soon, for the Ark was only just sinking out of sight on the horizon when the [dinosaurs] arrived, and added their lamentations to those of the multitude of weeping fathers and mothers and frightened little children who were clinging to the wave-washed rocks in the pouring rain and lifting imploring prayers to an All-Just and All-Forgiving and All-Pitying Being who had never answered a prayer since those crags were builded, grain by grain, out of the sands, and would still not have answered one when the ages should have crumbled them to sand again. (From Noah, the Ark, and dinosaurs)