On Monday, 25 000 people ran the Boston Marathon. The participation in many road races is greater than the audience for a lot of sports events. Some people have found out that doing is more fun than watching.

It’s late, so I’ll make this brief. The women’s race was won by Dire Tune. “Women’s marathoning is hitting its stride.”

It was a close finish:

In the women’s race, Dire Tune and Alvetina Biktimirova left a group of four at 16 miles, then ran together until the final 400 meters on Boylston Street, where Tune used a punishing kick to win in 2:25:25. Russia’s Biktimirova took second, just three seconds back, in the closest women’s finish in Boston Marathon history.

For much of the way up and down the hills, Tune drafted directly behind Biktimirova. At 24 miles, Tune pulled even and briefly took the lead before it became clear that the Russian would not be intimidated into relinquishing the win. In the last mile, the two traded the lead twice more before Biktimirova succumbed.

Tune said through a translator that she wasn’t sure she would win until she had safely crossed the finish line. Tune, 22, is the first Ethiopian women’s champion at Boston since Olympic gold medalist Fatuma Roba won the last of her three consecutive titles here in 1999.

The men’s race was won by Robert Cheruiyot for the third time in a row and fourth time ever. This year, he set the course record of 2:07:14. 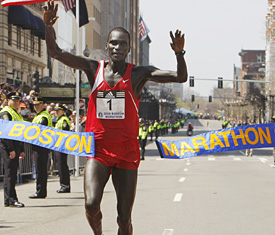 To enter the Boston Marathon, you must first qualify by running another certified marathon in a minimum time for your age group.

See Why We Run by Bernd Heinrich.