Here’s a nice little article. You probably know about this already: “Newsvine: Create the Controversy: ‘Expelled’ Movie Team to Bribe Moviegoers.” The makers of the ID propaganda movie is trying desperately to get audiences.

For more about the movie and the science behind it, visit Expelled Exposed.

David Bolinsky, the medical illustrator behind Harvard/XVIVO’s The Inner Life of a Cell, has written an open letter to Willism Dembski and the makers of the movie Expelled: “Expelled Ripped Off Harvard’s ‘Inner Life of the Cell’ Animation.” Images are from Christopher Sisk:

For more about this travesty of a movie, visit Expelled Exposed.

Any time is a good time of year for your Darwin Award candidate.

Two men were caught near London, Ontario, trying to steal hydroelectric wires for the power. The wires were carrying 13000 volts. For some reason, the men did not complete their theft and were later caught fleeing on bicycles. How did they plan to carry hundreds of pounds of copper cable on bicycles?

“This could have easily killed or seriously injured anyone that touched the exposed wire,” said Const. Amy Phillipo.

Prices for base metals have soared in recent years and thieves have been known to strip live wires for copper.

William Grigg, 50, and Wade Boudreau, 32, both of London, face charges.

London police have issued a warning that it’s dangerous to try to steal live wires.

After the producers of the movie Expelled inadvertently let a real scientist look at their Intelligent Design propaganda, they panicked. Afraid that an objective observer might see the movie, they pulled all their showings for several days. Then they replaced the original schedule with “To be announced” and applications for a waiting list. 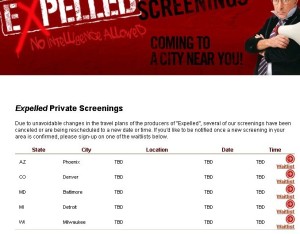 That enabled them to screen viewers and ask them what church they came from. The science bloggers who already had reservations were told that the screenings were cancelled. Some were; others were simple moved ahead an hour. Nevertheless, a few science bloggers managed to attend. They report that the movie is badly made, heavy-handed, and tries to say that the theory of evolution caused Hitler.

CTV news reports that methicillin-resistant Staphylococcus aureus killed 2300 Canadians in 2006. The Public Health Agency of Canada gathered the data through a national surveillance program undertaken in 48 Canadian hospitals. The data collection samples a cross section of institutions chosen to represent all Canadian hospitals.

The figures, based on data gathered from a, indicate doctors saw 29,000 new patients carrying methicillin-resistant Staphylococcus aureus (MRSA) bacteria on their skin or nostrils in 2006.Of those, 11,700 contracted new MRSA infections.

MRSA, one of the strongest drug-resistant bacteria currently known, can live on human skin without causing infection. However, if it gains entry to the body through a cut or wound, it can cause serious illness and death, according to the Mayo Clinic’s website. 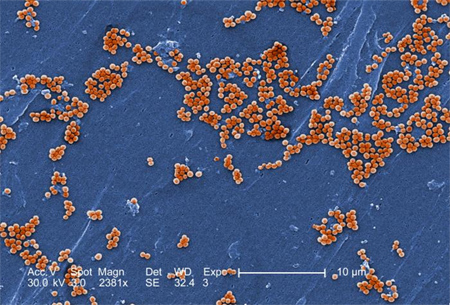 Dr. Andrew Simor, the chief of microbiology and infectious diseases at Toronto’s Sunnybrook Health Sciences Centre, co-chairs the surveillance program. He said the 2006 figures show a slow but steady increase over previous years.

“The good news is our rates remain substantially less than what is seen in the United States and many other parts of the world,” Simor told The Canadian Press.

According to the report, 62 per cent of the new MRSA cases reported in 2006 were acquired in hospitals.

Dr. Michael Gardam, the director of the University Health Network’s Infection Prevention and Control Unit in Toronto, says he’s glad to see this dangerous infection finally getting some attention.

“MRSA has been around for 40-50 years,” he told CTV’s Canada AM on Thursday. “This isn’t new. It’s amazing that only in the last few years is the public starting to hear about this.

“This is the untold secret of hospitals. People can come in for some reason and then end up dying from something they caught in the hospital.”

He said that thanks to the SARS epidemic of 2003, hospitals are slowly but surely improving their techniques for preventing such infectious diseases.

“We have to enforce proper infection control procedures: hand washing, these things are now being taken seriously in the last couple of years, whereas before we paid more lip service to it.”

Community-acquired MRSA accounted for 15 per cent of the cases reported in the study. The rest were acquired in long-term care facilities, hospitals outside the monitored network or were of unknown origin.

The rate of MRSA cases acquired outside hospitals has nearly doubled over the past five years, according to Simor.

The community-acquired cases addressed in the report are not representative of the actual number of infections, as they only include the cases that were bad enough to prompt the infected to seek hospital care — not those treated by a family doctor or in a clinic.

The increase in such cases is viewed by disease control experts as an alarming trend, particularly as they more often involve people who don’t fit the profile for MRSA infection.

This movement is something that concerns Dr. John Conly. Head of the department of medicine at University of Calgary, he has been following community acquired MRSA in the city and says what used to be common only in marginalized groups is spreading to the general population.

“We’re seeing now probably 20 per cent to 30 per cent (of infection cases) where we have no logical explanation,” he said, noting community acquired cases are actually outpacing those stemming from hospitals in a few areas.

According to the director general of the Public Health Agency’s centre for communicable diseases and infection control, more needs to be done to fight MRSA in hospitals and in the community.

Dr. Howard Njoo said containing the resilient bacteria is one of the most important battles to win from the perspectives of both disease prevention and cost effectiveness.

With files from The Canadian Press

The best protection against bacterial infection is frequent hand-washing with soap.

Dawkins on science vs. dogma

The enemies of science often confidently state that science is just dogma, just as much a religion as religon. That’s not true. People can be passionately wedded to their opinions and it can take as much as thirty years to settle some questions, but it does happen. Science can always be tested and corrected. Here’s an eye-witness story from Richard Dawkins:

I have previously told the story of a respected elder statesman of the Zoology Department at Oxford when I was an undergraduate. For years he had passionately believed, and taught, that the Golgi Apparatus (a microscopic feature of the interior of cells) was not real: an artifact, an illusion. Every Monday afternoon it was the custom for the whole department to listen to a research talk by a visiting lecturer. One Monday, the visitor was an American cell biologist who presented completely convincing evidence that the Golgi Apparatus was real. At the end of the lecture, the old man strode to the front of the hall, shook the American by the hand and said–with passion–“My dear fellow, I wish to thank you. I have been wrong these fifteen years.” We clapped our hands red. No fundamentalist would ever say that. In practice, not all scientists would. But all scientists pay lip service to it as an ideal– unlike, say, politicians who would probably condemn it as flip-flopping. The memory of the incident I have described still brings a lump to my throat.

For more about science vs. dogma, check out the Expelled Exposed Web site.